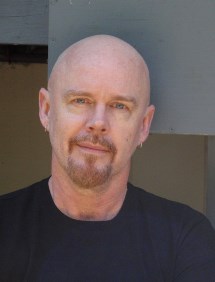 Literatopia: Hi Tad – it’s been five years since our last interview – how have you been? How is your charming wife Deborah?

Tad Williams: Still charming.  And I'm fine, too.  Our children are teenagers, we live in an entertaining and somewhat disorganized family hive of humans and animals in the forested hills near the Pacific Ocean.  And all my enemies are dead.  (Actually, I don't think I have any real enemies.  I just put that last part in because it sounded awesome.)

Literatopia: “The Dirty Streets of Heaven” will be published in German in July. Can you tell our readers a bit about the book? The novel’s description sounds like it might be Urban Fantasy – is it?

Tad Williams: If you need a category, then I guess that's it.  The main character is an angel, a functionary in the ongoing Cold War between Heaven and Hell.  He's a bit of a troublemaker, and he doesn't get along with the powers-that-be.  But things get rapidly worse when a soul doesn't show up for judgment, then someone sends a pre-Christian demon to destroy him.

Pretty soon, he's caught between to two sides with nobody to trust and everybody out to get him. After that, things get a bit difficult.

Literatopia: So what’s this Bobby Dollar guy like? And why did you decide to make him an angel instead of a devil?

Tad Williams: Because he IS an angel.  He's just not very good with paperwork and following rules.  Classic noir-type main character.  Actually, his main problem is that he's too smart to like being a good little angel, but too dumb to just go along with the program and stay out of trouble.  He's basically me, but with a little less impulse-control.

Literatopia: A war between Heaven and Hell – that sounds very epic and religious. How big of a part does religion play in your trilogy? And does Heaven equal “good” and Hell equal “bad”?

Tad Williams: Hard to explain quickly, but as I hope my readers would expect, everything is a bit more complicated than the standard version.  In the second book Bobby actually goes to Hell, so the reader gets plenty of chances to try to puzzle out my philosophies.  Religion runs all through the story, but it's mostly in a philosophical and world-building way.  Like I said, hard to explain.  Still, I think people who are hoping for a religious tract are going to be disappointed, and somebody wanting a fast-paced, scary, sometimes funny story will be pretty happy. 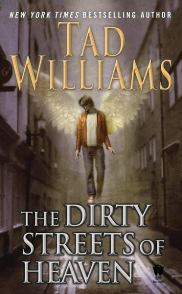 Literatopia: Your first fantasy novel “Tailchaser’s Song” is being turned into an animated movie. How closely does the film stick to the original? And are you involved in the project at all?

Tad Williams: The script and what I've seen of the plans for the film are very, very close in nature to the original book.  I haven't done a whole lot for the actual creative side of the project because there's not been much for me to do, but I've offered feedback and/or suggestions when asked.  But the people doing it know how to make animation, so I'm mostly just sitting back and waiting to see what they come up with.  I'm very happy so far.

Literatopia: What does it feel like to see your story turned into a motion picture and to see the characters you thought up come to life on the screen? Will any more of your books be turned into movies?

Tad Williams: It's great.  I spent a lot of my creative life working in collaborative media, so I'm happy with the idea of someone building off my ideas.  I don't expect a film (or a game) to be an exact version of my book.

That's not actually possible.  You just hope you get hooked up with people who see things the same way, or (when they see differently) even better.

Literatopia: “Otherland” will be turned into an MMO-role play – what’s in store for the players? What platforms will it be published for? Will there be a German version available?

Tad Williams: The Otherland MMORPG is being finished now, and since a lot of things changed in the last few years as the game market changed, I'm not the best person to ask about how exactly it will be delivered.  The last thing I knew is that it was for PCs, but that may have changed.  I hope they get it out soon -- it's beautiful and fantastic, and I want people to be playing it.

Literatopia: Which versions of your covers do you like better, the German or the American ones? Are you happy with the beautiful design of the German hardcovers? Or is it something you don’t care about too much, really?

Tad Williams: I'm an artist myself by inclination, so I always look at the covers.  I've liked the German covers, often precisely because they were so different from what I was getting in other markets.  Klett-Cotta has always been very good about doing bold, exciting packaging.  As to which versions I like best -- well, that's like asking parents to choose a favorite child.  Most of us just refuse to do it.

Literatopia: We hear you’re studying German now? Why did you choose German? How are you proceeding?

ad Williams: I've been trying to learn German ever since I first started coming to Germany in the early 2000s, but the process has been suffering because 1) I don't learn languages as fast as I did when I was younger, and 2) my life is so freaking busy that I don't get much time to practice.  I've actually mostly put it aside the last couple of years, so the next time I'm there it's going to be really embarrassing if anyone expects me to be fluent.

Literatopia: In our last interview you said that you are taken seriously as an author in the German-speaking countries – is it different in the US? Is Fantasy seen as a genre of somewhat less importance or artistic value in the US?

Tad Williams: It's not just that, although Europe has always treated science-fiction and fantasy more seriously than the US as a literary form.  But I also had the good fortune to be published by a well-known publisher of serious books, which got me reviewed in a lot of places that wouldn't normally have been reviewing me, and since the first story that got that treatement (Otherland) had a lot of contemporary issues and ideas in it, it really helped establish me as a writer worth talking about.  I love that.

Literatopia: In our last interview you also said that you like to listen to the stories other people have to tell. Will you tell us about an especially interesting story or an especially memorable person you came across during the last five years? An author, for example, whose work you admire?

Tad Williams: I'll give you an example that covers a lot of those points, although I can't claim the person is new to me.  My good friend Josh Stallings, who I've known since high school, has been moving from his primary career in film editing to writing, and has been doing some great hardcore crime fiction, but he just published a book called  "All the wild children" about his upbringing in the SF Bay Area, including all the years before I met him.

It's a very good book on its own merits, but reading that (even though I was witness to or participated in many of the events) was like somebody leading me into a familiar house (namely, my own youth) where I thought I knew every angle and corner, and then throwing open all the doors and windows so I could suddenly see the neighborhood, the garden, and all kinds of other things I hadn't known or noticed before.  All the old stories suddenly took on a huge new dimension.  It's like "Rashomon" in your own life.  And when I think of all the people I knew and know, and how every single one of them is living their own story, with which I am only intersecting...well, it's a fascinating reminder of how occluded we are most of the time, able to see only what's in front of us and hardly ever asking, "By the way, what's on the other side?" 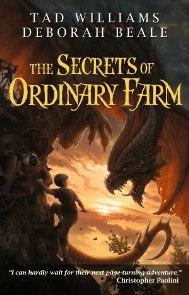 Literatopia: Do you know the number of languages your books have already been translated to? Do you get copies of the German versions of your books for free or do you have to buy them?

Tad Williams: Last I remember my books were translated into a couple of dozen languages.  I get lots of free copies of most of the translations, most definitely including my German editions.  German, Spanish, and French I can actually read a little -- Japanese and Bulgarian and Finnish, not so much.

Literatopia: ebooks have become a real alternative to printed books. What do you think about digital books? Do you think real, printed books will become obsolete in the near future?

Tad Williams: I don't think ebooks will destroy printed books, but I think they'll largely replace paperbacks.  People will always want nice, well-made versions of important things, just as they do now with musical instruments or cars, but the "mass-market" versions will probably be electronic.  But nobody knows for sure, which is one thing that makes my industry very interesting and very scary right now.

Literatopia: Will there be new adventures at the “Ordinary Farm” for us to read soon?

Tad Williams: Actually, for the first time in a couple of years Deborah and I are back working on Ordinary Farm, and should have the third book written before too long.  No title yet, but we'll let you know.

Literatopia: The second book of your new trilogy, “Happy Hour in Hell”, will be published in the US this year. What could we expect from you in the near future?

Tad Williams: The third (and final volume of this group) Bobby Dollar is called “Sleeping Late on Judgement” Day and it's pretty much finished.  Then I'd like to keep doing the BD books as "standalone" novels while I'm doing other kinds of books, too.

Literatopia: Thanks a lot, Tad!

Tad Williams: You're welcome.  Nice to hear from you! 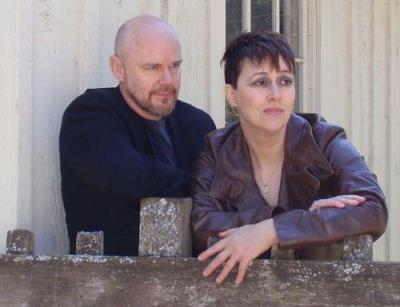 This interview was done by Judith Gor. Copyright by Literatopia.de. 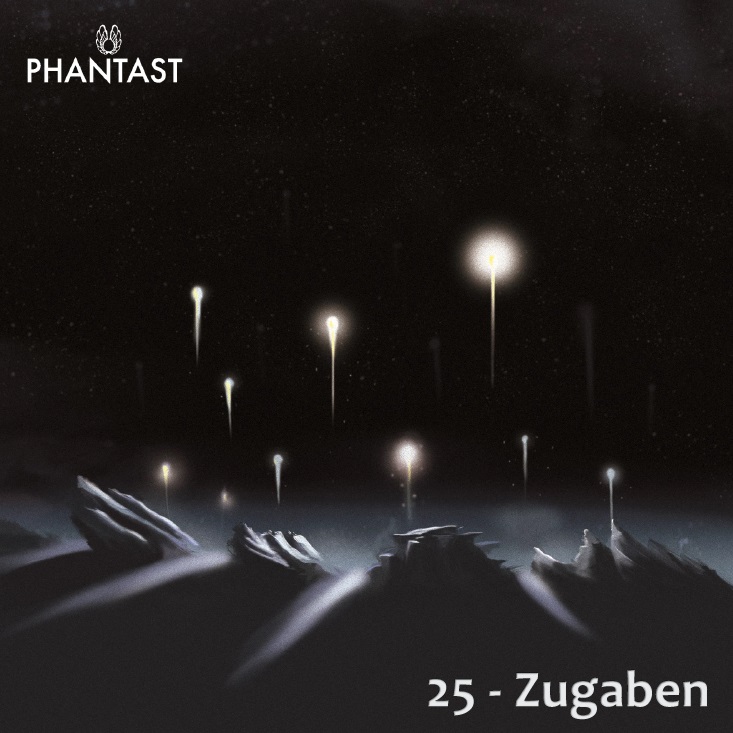