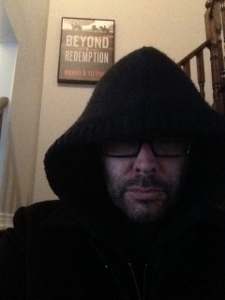 Literatopia: Hi Michael, some time ago you wrote „Beyond Redemption“, a fantasy novel based on an unusual and fascinating concept. How would you explain it and how did you come up with the idea?

Michael R. Fletcher: The basic idea for “Beyond Redemption” is pretty simple : Reality is responsive to the beliefs of humanity. If you convince enough people of something it will become real. I loved the idea that, with this very simple premise, humanity could make for themselves a utopia. I, of course, took it somewhere dark.

If reality bends to belief, what are the insane capable of? What of the pyromaniac? What of the sociopath craving worship and attention? What of the kleptomaniac, the schizophrenic, the person suffering from Cotard’s Syndrome?

The germ for this story began back while I was still working as an audio-engineer, recording albums for bands. I was doing an album with a local Toronto band called Dirty Penny. They had a song that was a very strange retelling of the conflict between Francisco Pizarro, the Spanish Conquistador, and Atahualpa, the Incan Emperor. The story showed the meeting of cultures as a battle of ideologies.

After that I wrote a few short stories exploring the idea. One appeared in the “Arcane II Anthology” and the other in “Grimdark Magazine” Once the basic system of madness came together I wrote “Beyond Redemption”.

Literatopia: Can you tell us something about your main characters?

Michael R. Fletcher: In spite of rumours to the contrary, they’re all lovely characters.

Ok. I was in a fairly dark place when I wrote this. I’d come to the conclusion that people basically weren’t smart enough to learn from their mistakes. I was also annoyed with the number of fantasy books featuring pretty people with nice hair. I wanted a book where everyone was ugly. I wanted a book where the characters were…Beyond Redemption.

Literatopia: Your story is set in a dark, violent and claustrophobic world. Your characters both witness and do some pretty disgusting things and lack many of the qualities that usually make it easy to identify with someone. There may be a trend towards darkness, grittiness and moral ambivalence in fantasy, but “Beyond Redemption” seems to take this a few steps farther than other books. Have you ever been afraid that this might cost you a few readers?

Michael R. Fletcher: I wrote BR thinking a half dozen of my close friends were likely the only people who would ever read it. Not for a second did I think it would sell to a big publisher. I was stunned when it first landed me an agent and then Harper Voyager bought the book. I kept waiting for them to tell me to change it, that there had to be a likeable character because that’s the rules. They didn’t.

That said, I know it has cost me some readers. Some folks find it too dark. That’s fine. It wasn’t written for them anyway.

Literatopia: Many of the characters in “Beyond Redemption” suffer from severe mental illnesses. I can imagine that it is quite challenging to write from their perspective. Did you find it very difficult and did it require a lot of research?

Michael R. Fletcher: If I found it easy is that bad? 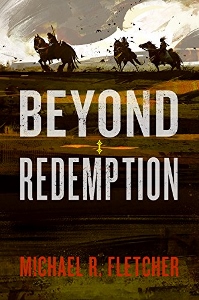 I write by getting in the head-space of each character. I pretend to be them, roleplaying their parts based on what they know and making all the decisions that I think they would make. Since I didn’t plan the book, I wasn’t tied to a plot outline. If they did something insane and got themselves in a bind I left it to them to figure their way out. If they couldn’t, they died.

The sociopaths were the most fun to write. One of the characters, The Greatest Swordsman in the World, was based on someone I knew very well. Some of his dialogue was taken verbatim from conversations we had.

Literatopia: At the beginning of every chapter there is a fictional quote by a historical person from your world. Do you have a favourite among those?

Michael R. Fletcher: Those were so much fun to write! That’s like asking which is my favourite child, I can’t possibly pick one. I also wrote a couple of new ones specifically for the German translation.

Literatopia: You used a lot of German words and from what you wrote on social media I gathered that you got somewhat mixed reactions to that. Why German?

Michael R. Fletcher: First the ‘why German’. I love the way the language looks. I love all the K’s and hard Gs and the fact you cram nine consonants into a twelve letter word that we have a three letter for (two of which are vowels). I wanted to stay away from the whole Anglo-centric feel prevalent in so much fantasy. I wanted words and names that would scare and confuse Anglo readers.

Remember what I said earlier about thinking only my half-dozen friends would read the book? Well, none of them speak German. At least not well. I thought it would be cool to hide hints—little Easter eggs—in the names.

Literatopia: We talked about this on Goodreads before and I have to ask: Does German really sound that harsh? It’s really hard to imagine listening to your own language as pure sound, so I absolutely can’t tell. And how will your translator handle the names in the German edition?

Michael R. Fletcher:Keeping in mind that I speak no German and would mangle the pronunciation of even the simplest words, yes. Yes it sounds harsh. But awesomely harsh. As I said, it’s all those hard consonants. And those umlaut! Why the hells doesn’t that word have an umlaut? They just look cool.

Having read the English version of BR you know just how badly I mangled German. Mirka, my editor at Bastei Lübbe, changed pretty much every single name. She had to. She came up with new names for all the characters and sent me a spreadsheet explaining her choices and they were awesome. I’m stunned by the amount of work she poured into my insane little book.

Literatopia: What do you think of the cover of the German edition and the title they have chosen?

Michael R. Fletcher: Looks good! I don’t know the German market so I can’t really comment on whether it’ll work well. “Chroniken des Wahns: Blutwerk” (Chronicles of Madness - my understanding of the title’s translation) makes sense. And Blutwerk (the subtitle) is pretty cool too. Hopefully it’ll sell and they’ll be interested in the sequel.

Literatopia: I’ve got the impression that English/American/Canadian Authors are a lot more active on social media than many of their German counterparts. Do you enjoy the direct contact with your readers or does it sometimes feel like a chore to you? 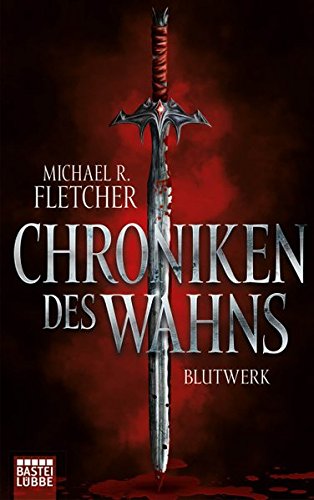 Michael R. Fletcher: It’s never a chore, but I’m torn. On the one hand there is absolutely nothing interesting or cool about me. I think I’m probably better off being a mystery. On the other hand, one of the best things is having people reach out and tell you how your book impacted their lives.

I enjoy the interaction and have made a lot of great friends all around the world. All without leaving home!

Literatopia: Is there anything you found surprising about life as a writer?

Michael R. Fletcher: I’m amazed how little changed. No one where I work has any idea I’m an internationally published author. Last week I got fan-mail from Iceland, the Netherlands, and Australia. While I’m at work, driving around on a forklift, I have email conversations with my various editors, publishers, artists doing cover work for me, and my agent in New York. And then I move boxes of bearings around a warehouse.

Literatopia: You are not only a writer but also used to play in a band and music seems to be very important in your life. Can you tell us some more about that?

Michael R. Fletcher: I played guitar in a goth/metal band called Sex Without Souls for about a decade. We were never famous but we did blow things up and play several fetish nightclubs. These days I play the song Charlotte is a Ninja Warrior Princess on my acoustic guitar for my daughter (which I wrote just for her). Over and over. Amazing how children never tire of a song.

I listen do still to skull-crushing death metal while I write. It’s the perfect mood music. And with all the audio gear left over from my studio days I have a pretty sweet sound system in my office.

Literatopia: You have announced that there will be more “Manifest Delusions”-novels. Are these books sequels to “Beyond Redemption” or independent stories set in the same universe?

Michael R. Fletcher: ”The Mirror’s Truth”, the sequel to “Beyond Redemption, will be released November of 2016. “Swarm and Steel”, another book set in the same world b”ut with a new cast of characters, is coming out in August of 2017. Depending on how BR sales are in German, there may be translations of these too. We’ll have to wait and see.

Literatopia: You have contributed stories to anthologies such as “Evil is a Matter of Perspective”. Do you find it difficult to write short fantasy fiction, considering that fantasy novels seem to have a tendency to become endless epics?

Michael R. Fletcher: The short story was fun to write. I wanted to do a fucked up love story featuring one of the background characters from BR. I do prefer writing novels. I like having room to explore ideas and characters. I find short fiction more challenging.

Literatopia: How are the crowdfunding campaigns for these anthologies going? Do you think the importance of crowdfunding for publishing will increase in the future?

Michael R. Fletcher: The only anthology I’m currently involved with is “Evil is a Matter of Perspective: An Anthology of Antagonists”. It’s fully funded. I believe they hit all their stretch goals too. I’ve handed in my crazy love story and they didn’t puke on it or send me hate mail so I’m thinking we’re good.

The future of publishing…I have no idea. I prefer hiding in my cave to thinking about the future.

Literatopia: Can you imagine writing another novel in the “Beyond Redemption” universe or do you want to try something entirely else with your next projects?

Michael R. Fletcher: I have a fantasy novel in a new world I’ve been working on. Right now it’s in the world-building stage. I have the characters, the background, the magic system, and the basics of a plot. As soon as I have all the edits off my desk for the various “Manifest Delusions” novels in the works I’ll be back into it. I can’t wait! Much as I love the Manifest Delusions world, I really need to do something different next. If there is a demand for more, I’ll definitely write more.

Literatopia: Thank you for this interview!

Michael R. Fletcher: It was my pleasure!